This is NOT a post about politics. This is a post about people.  I have been wanting to blog about the Mayor for a couple years since my first picture with him was taken.  The election is today. Today’s the day I better do it because no one knows what the polls will bring. 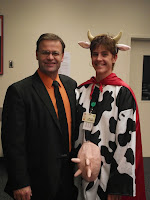 My facebook profile picture is taken from this. I chose it as my profile pic when I was the most mad at this guy. Well, maybe not the most mad because I think I’d settled down a bit. I wanted a cow pic and this was the best I could find. Ah…another rose among the thorns metaphor.
This picture was taken at a Science, Technology, Engineering and Math (STEM) outreach event at my company. I was the emcee for a 3-day event of high schoolers onsite to learn about all sorts of things STEM. Day 2 fell on Halloween so OF COURSE I DRESSED UP!!!!  OK. I might have dressed up even if it was the middle of July because the COW-culator is just cool.  Day 2 was also when local dignitaries (politicians, university and school district 25 officials, and technical business owners) were in attendance to check out the program.


Being in a cow suit around the suits and ties and dress pants is somethin’.
This picture was captured about 5 months before I would meet the Mayor again in person to discuss the City’s proposed non-discrimination ordinance.   I did not wear the cow suit, but I thought about it.


I wore black pants and a pink shirt for our private meeting in his office. The outfit captures the colors of cow and offers a splash of girly. I also wore my dress shoes with a heel. I intended to be taller than he for our firm handshake before talking. I had heard from another friend that she felt intimidated and almost bullied by him. (I realize this is hearsay, and I hesitate to add it, but it goes to my state of mind and also how I’ve continued to approach my relationship with this man and many other people as well.)
My meeting was nice. I was very candid with the mayor about some very, very personal and private experiences and I felt he listened with as kind and as understanding of an ear as he possibly could. His life experience and perspective are different than mine. Everyone’s on the council’s are. That’s why I finally had to force some conversation. I can tell ya….the Mayor likely knew darn well when we posed for that picture who he was standing next to. Does it look like he has an issue with it? With me?


The funny thing…this wasn’t my first picture with him while in a cow suit.  I’d cheered at a fun run at a local elementary school the year before with some friends and his kids were there running. He posed with the herd then. 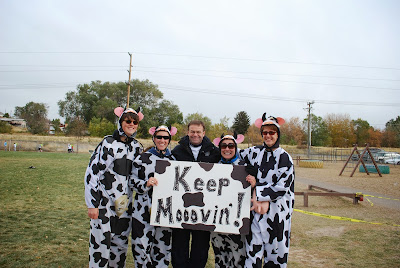 So…back to people and not politics. (well, not  a lot of politics) The Mayor and I disagreed on a number of elements of the ordinance particulars and I did not care for how he approached a number of things. But I like the guy. How do I reconcile this in my head? I was mad at him for things I heard him say and for how I saw him handle things. I was mad on the behalf of friends who relayed their experiences. What do I do with that anger?


I compartmentalize my brain like a cow’s belly. That’s what I do. I also run. I bike. I put on the cow suit and I continue to live and just hope people continue to get to know one another and grow right along with me. I don’t like feeling angry. I don’t like holding on to that.
My first handshake with him after the ordinance votes was in a cow suit.  Of course it was. He made the effort to cross the street and look me in the eye and shake my hand while he was in a fun run. And I didn’t think twice about extending mine.
I’ve teased him for months about cowing with me. For a recent $300,000 grant contest, city employees borrowed my suits for a video campaign called “Healthy Heifers of Po-Cow-tello and Chubbuck.” I almost got him in a suit then but …politics. Humph.  He said “his people” didn’t think it was a good idea.  I udderstand.


Well, this weekend...this happened. He was kicking off the start of Pocatello’s Just Cuz marathon when he saw our small herd cheering. He stopped and shook my hand and said, “Ya know what—I’ll come back after I start the race. And yes. I’ll put on a suit with you.” 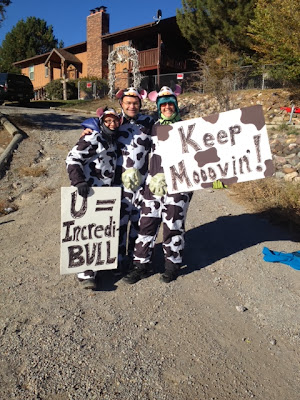 YESSSSS!!!!!  We exchanged a few innappropriate udders jokes and I betcha for about 8 minutes he forgot that he was in the middle of a cow crap fling fest that happens the weekend before an election.


I have considered politics. I think being the Mayor of Pocatello would be awesome. I love this place and all of its quirky beauty and imperfections.  But I would have a similar problem that I think this Mayor has: I’m a nice guy. (Gender aside, of course.)  I would struggle making decisions because I really want everyone to be happy. I want everyone to put on a cow suit and cheer for everyone who isn’t in one for whatever reason, and I just want everyone to get along.
That’s unrealistic, though. You have to make a decision. And today…I’m going to have to make one.