This is Ben. He's the guy that I first ever donned the cow suit to root for in a race. His (dare I say) mid-life crisis decision to run a marathon was the cow-tipping point for the heifer cheering section. I had to cow tonight for his 40th birthday.
Some things about Ben...he's a math & science guy who loves a good geeky pun as much as I do. He is smiling much more often than not. He probably would not like you to know he's a "tech guy" because he already gets a lot of calls from friends when their caps lock is on and their password doesn't work. He is an avid runner now, and is usually one of the first people I know to pass the cows whenever we cheer. (Although we are getting to know some of the regular runners in our community.)

In many of his races, he wears a bright red shirt that says "Team Beef." Out of the blue for his first run, they asked if he'd wear their shirt if they paid his registration fee. He didn't know we were going to cheer for him that first time in September of 2011 and I didn't know he'd be touting Team Beef.  That right there...bovine intervention.

Always wishing you green pastures and sunny skies. See you at the next stampede!
Posted by Billie Johnson at 8:12 PM No comments:

I turned 41 yesterday. I spent most of my birthday in a cow suit. And a shiny red cape. Forty-one seems like a good time to reinvent the birthday suit, and luckily I had an exquisite opportunity.

A few weeks ago, my pal Sherry emailed to ask me if I would emcee the FIRST Lego League robotics competition at ISU.  Twenty-four teams of 6-10 middle schoolers each competed in an event in which they were judged on a research project presentation, their Lego robot design, a teamwork exercise and overall robot performance. Half of the teams advanced to a state competition in January and from there, some will go to Nationals. Since its inception in 1989, FIRST [For Inspiration and Recognition of Science and Technology] has become the premier STEM program for middle schoolers through their Lego League and high schoolers with robotics.

I met Sherry when I volunteered to emcee 6-7 years ago. I don't quite know what her "day job" is all year, but she works at ISU's ESTEC (Energy Sytems and Technology Education Center). She pulls together this tournament annually with amazing execution. I had been a judge for the event in 2003, and it's tough. I much prefer directing behind the mirophone. Previously, I've worn a Ninja Turtle t-shirt with a black jacket and Converse sneakers. Boooooring...

This year, I went as "The Cow-culator". My red cape has a calculator sewn into the back.

I let everyone know throughout the day, that they had unwittingly come to my birthday party. Hooray! I was explaining this blog to the crowd and that I needed a picture of all of my birthday "guests". Speaking of unwitting....you'd think if you were taking a selfie, you'd actually smile as you took the picture. Let's call this, "Clueless Cow" 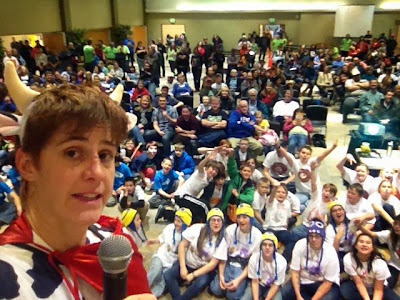 There's often a need for improv while the judges deliberate and cow-culate. Luckily the high school robotics team is on hand as volunteers and they led us in the macarena. Video whould have been priceless. 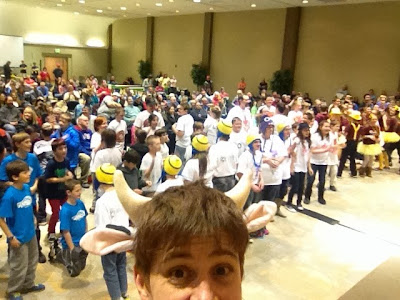 I gingerly encouraged all the lil future engineers among the crowd to give it a whirl because my experience has shown that the technically minded are not the most coordinated of dancers. I, myself, am an excellent marcher, but quite a horrible dancer. Until it comes to the macarena. This one, I can do!! The only near slip of the day came when I belted through the microphone, "Shake your udders!"

The entire group sang "Happy Birthday," and I received at least 40 personal and heartfelt "Happy Birthday's" throughout the day from exciteable, bubbly, awkward, and kind middle schoolers--and a few parents, too. It was a beautiful bovine birthday.
Posted by Billie Johnson at 7:15 AM 1 comment:

I’ve never put on the cow suit with as much dread.  I’m not dreading the cow suit but rather where I’m going. I’m taking my 12 ½ year old golden retriever to the vet for a tumor removal and a chest x-ray.


We missed Halloween, so Quincy and I are wearing our suits this morning, darn it! She is the first dog I've ever owned. She is a naughty pain in the @$$, but I love the lil thing.
This tumor is slightly smaller than a tennis ball. Quincy loves tennis balls! She’s got lumpy lypomas all over her body, but this lump is different. It surfaced during my last 2-week business trip, and it’s warm to the touch. The vet let me know that if the x-ray shows more tumors or spots, he won’t proceed with the removal.


I know when I get a pet that I sign up for this part, but damn. I’ll be a heavy heifer wrought with worry for a few hours…
UPDATE: Her chest scan was clean and the whole procedure went as good as it possibly could. Her incision is more than 12 inches long, though, with over 70 staple stitches. It's scary. As I watch her continue to sleep off the anesthesia, it's hard it believe how spritefull she was this morning. 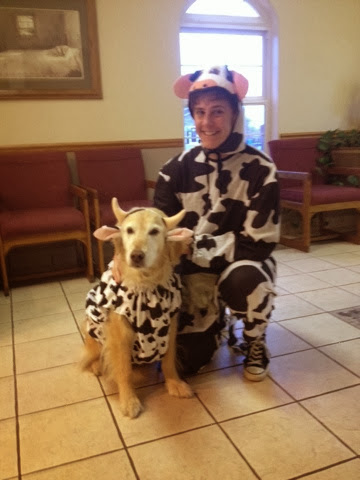