The Amazing Cow behind My Capes

I've been thinking about this entry for almost 2 years. It's taken me so long to write because Krystal just keeps adding to the list of udderly amazing things she's done. The latest in her cattlog is constructing the key element in my recent marriage proposal. (I still sorta lose my breath at those words.)  I'll get to that later, but first... THIS is the Amazing Cow behind my Capes.

Krystal is a civil engineer, mother of two teenagers and seamstress extraordinaire. I met her through our mutual work with MATHCOUNTS, an extra curricular middle school math program. Her son, who just recently graduated from our alma mater, had been involved in the club, but her current role comes from the side of the engineers who help sponsor and implement it each year. She is now the Chapter Coordinator for the southeast Idaho chapter of MATHCOUNTS and her most recent professional project has been the new Wellness Complex in town. Almost two years ago, I corralled Krystal into attending a meeting of the Eastern Idaho Engineering Council (EIEC) at a restaurant in Blackfoot. It's halfway between Pocatello and Idaho Falls to help get engineers from both cities to attend.

The EIEC is a main contributor to MATHCOUNTS and also serves as a catch-all organization for engineers in the area to hear about professional development and volunteer opportunities. I was the president at the time, and I wanted Krystal to take over the next year.  Oh, and on that particular day, a friend of mine had just had a hip replacement surgery in Blackfoot, so I asked her if she would also consider cowing with me. Krystal is a contributor. Period. She didn't hesitate for a second on either of these tasks.

The pictures tell the story...

After the hospital, we headed over to the EIEC meeting. As we strolled through the hospital parking lot, Krystal noticed our shadows. She  laughed and shrieked, "I have a tail! Oh my gosh. I didn't know I had a tail!"  Awww, the happiness that can be found in self-awareness.

Krystal had spent about a year working in Connecticut, so she was returning to see a few folks she hadn't seen in over a year--in a cow suit. Now, I'm used to this, but watching Krystal proceed with confidence and candor was fun.  As the guys filed into the meeting room, they were taken aback. Some male engineers really do say and do the weirdest things around female engineers, and having us in cow suits just added to the dynamic.

But not Ron. He's been an engineer and volunteer for years and frankly is a darn good hugger. This Guy.
We kept our cow suits on as I conducted the hour-long meeting and had dinner, and wore them on the way home. I really didn't know much about her when she agreed to accompany me to Blackfoot, consider the role of president of the EIEC or join me in a cow suit escapade through a hospital on a Wednesday night, but we had a conversation I won't ever forget.

At one point, she asked about my involvement with the Family Services Alliance (FSA.) The FSA is a non-profit in our area who's mission is "to promote safe and thriving families, work to end physical, sexual, and emotional abuse, and provide victim support."  From their website, FSA exists to help survivors, their family and friends, and the community. If you have been, or currently are, a victim of domestic/dating violence, sexual assault, rape, stalking, or human trafficking, we can help you in a confidential and caring manner."  They can be found at http://fsalliance.org.

I was a little confused by the question because I'm not involved with the group at all. It took me a minute to think about where Krystal got the idea, and it was a fund-raising bike ride that I had participated in the year before. I had posted one or two lines on Facebook about it and I wrote a column for the local paper as well. (The piece was called "When my Care Bear Got a Perm.")

Krystal then told me about her experience with domestic violence. She left an abusive husband when her kids were young, but she'll tell you that she should have left him much sooner than she did. It took seeing that her kids were in extreme danger, too, that flipped the switch for her and she fled. After that divorce, she enrolled in the engineering program at ISU and went on to get both her Bachelor's and Master's degrees in Civil Engineering as a single mother raising two kids.

That night and that conversation with Krystal as we drove along the farm land of I-15 in cow suits to the setting sun will stay with me forever. FOREVER.

Later when I wrote the newsletter for the EIEC to introduce Krystal, I included the following picture and description. Seriously.  No.  Seriously. 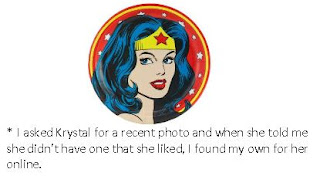 I can't remember exactly when I learned that Krystal can sew, but holy cow! Can she sew!  She was a fan of my "Cowculator" character who spoke at MATHCOUNTS events, and when I flippantly said one time that I needed a cape... Krystal made it happen.  Boom. Shiny red cape to help fully complete my ensemble.


This past year I got another opportunity that called for a cape.  So, I called Krystal.  I was asked by the local school district if I would help them present their monthly CAKE award to celebrate and recognize Character, Attitude, Kindness and Encouragement. In my cow suit. Would I?!?!  You bet your udders, I would!

Although the cow suit was fun and lively, which is what they wanted, it didn't really make a lot of sense, so I created the Cow Crusader of Kindness.  I have a snazzy purple pair of converse sneakers, and I thought that a shiny purple cape would be grand. And bam! Krystal made it happen!
So, now I have two capes and two different and awesome cow suit personas--both thanks to Krystal.

This past year I was the keynote speaker for the ISU Women in Work conference. This day-long event presents career options in STEM to over 200 high school aged girls and women returning to the workforce. The event concludes with a Career Showcase (or a fashion show.) When event organizers asked if I would participate, I said that I would only if I could wear a cow suit and go as the Cowculator. (An electrical engineer's wardrobe is really not all that exciting.)

After police officers, forensic pathologists, welders, mechanics and other professionals showcased their attire, the Cowculator came on stage to celebrate and recognize all of the women in STEM who become heroes in tackling the problems and challenges they face.

As the crowed cheered and giggled at this, they have no idea about Krystal. She is strong and fierce; selfless and resilient and wears her own invisible cape every day. Together we've built the Cowculator and the Cow Crusader of Kindness and while I get to revel in the smiles and fun that comes with these shiny shawls, none of it would be without the amazing cow behind my cape.