Cowing has grown.  When it first dawned on me to write about my adventures in a cow suit, it was about how people looked at me. It was about how I felt in the cow suit while people’s faces changed as they took in the full costume.


Cowing has also become how I feel about the people who cow with me; how my views of them change and grow as soon as they sport the udders.
This cow quest features three people who went to high school with me: Josh, Rainbow and Daria. None of us hung out together back then. At all. Rainbow was on the sophomore basketball team with me and I had Josh and Daria in an honors English class. I’m not sure if they even knew each other.
Daria’s vocabulary was amazing. (She’d come up with way better adjectives.)  She was intimidating.


Rainbow’s hair was always perfect and she was always smiley. She was intimidating.

Josh was a state champion wrestler and the wholesome seminary president. He was intimidating.
And I’m pretty sure with that rockin’ bi-level flattop, I was intimidating, too.


Look at us! Don’t we just scare the heck out of ya?
They fit into little corrals in my high school mind, and I stayed in mine. I’d love to go back and tell my 16 year old self:

QUIT CORRALING PEOPLE! INCLUDING YOURSELF!


Let them surprise and delight you because they will. Indeed. Josh, Rainbow & Daria have surprised and delighted me, not just because they cowed with me, but also because I’ve gained a friendship with all of them since our 20 year reunion two summers ago.
Cowing last Saturday was like our modern day Breakfast Club mooooovie.  Daria definitely felt like it was a detention of sorts. The class two years behind us (Poky's Class of '93) was having a 20 year reunion fun-run, so I threw out a cattle call on Facebook to see who I could get to come cheer with me:

Any Poky Class of 91 people want to Cow with me tomorrow at 8am??
Anyone? Anyone? Moo-ler? Moo-ler?


These were the takers. Josh brought his daughter Julia and his son Jacek. We'll have to do this again because I'm sure his wife and other two kids feel left out. (She was his high school sweetheart.) 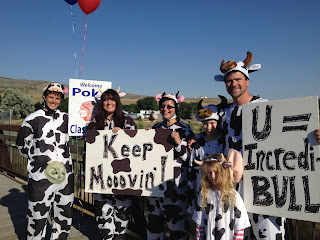 And although they’ve busted out of the corals my mind had them in, they still fit in my head only as I see them. I hesitate to even attempt to describe them because people are so much more than how we see them. They are how they see themselves; how their loved ones treat(ed) them and how that mixes with everything. As soon as I describe them, I corral them. Hey—at least mine is a welcoming, fun and ever-expanding corral.
Rainbow still maintains a constant friendly smile and I feel a happy system reset every time I hang out with her. Daria follows her whims like I wish I could and has a never-ending depth of quirky information in her head. Josh is thoughtful with an enviable career and picturesque family, and come on…the  guy could put his kids through school modeling for REI’s men’s adventure gear. (Though not likely in the bovine ensemble.) 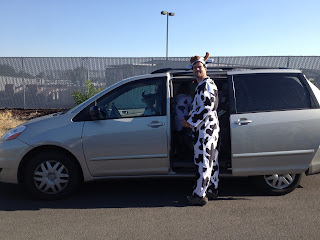 I also know that each of them has had their share of challenges since our time at Poky High. Snippets in conversations, outright disclosures, and a firm kindness in each of them tells me their life experience has expanded their own mind’s corrals.


Their enthusiasm to cow sure expanded mine. 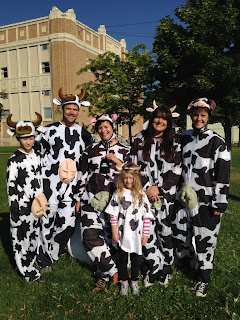 Posted by Billie Johnson at 9:31 PM