He Lets Me Love Them

A couple years ago, I gave a TEDX talk about my adventures in a cow suit at the TEDxIdahoFalls event. Organizers held a number of workshops to help speakers synthesize our thoughts and really hone in on our message and delivery. After I presented a first draft, one of the speaker coaches suggested I explore how the cow suit combats taking life too seriously. At first, I silently poo-pooed his idea, but the more I thought about it, he hit the bullseye.

I've used my cow suits (I’ve got 11 of them now) to disarm myself and others, to direct interactions and simply add some levity in life when it has seemed impossible to find – when life was almost too serious to handle. The title of my talk eventually became “My Udderly Serious Life: Uncovering Courage in a Cow Suit."

With their permission, I incorporated pictures of all three of my step-kids who were 11, 14 and 19 at the time. As I was making edits and working through draft after draft,  I was struck by how disingenuous it felt to mention or showcase the kids on such a wide, visible stage without including their dad. In fact, when I bring up the kids in a column, I feel remiss not having mentioned him.

As an engineer and lifelong math geek, the transitive property comes to mind. If A = B and B = C, then A = C.  If he is the kids’ family and I am the kids’ family, then he and I are family. We may not have chosen to be each other’s family, but here we are.  While working on my talk and folding in family, it was important to me that he be included.

But my talk was about my cow suit adventures. How in the heck was I going to get this guy in a cow suit or have an interaction with him while I was in the cow suit that would be authentic and natural? And would he even be on board appearing in my talk that centered on something as ridiculous as a costume cow suit?  The guy grew up on a dairy farm, so I had that going for me, but I hemmed and hawed about whether or not to approach him and what to say.

I imagined the setting from his perspective. His ex-wife gets remarried. Her new spouse calls him up and starts out, “Hey, listen, I’m giving a TEDx talk about my cow suit adventures, and I was wondering...” That’s pretty much what I did but with an email. He was already well aware of the cow suit shenanigans, but I’m not sure he knew how I felt about him or our relationship until I told him.

The better I’ve gotten to know their dad, the better I’ve gotten to know the kids. I’m pretty sure they were all versed in witty sarcasm before their baby teeth fell out. They all appreciate science, logic, and reason and have a penchant for all things technology. The boys in particular move their hands like he does when they debate, argue or simply get excited. Their smirks are identical and arise from the same things. Knowing what motivates their dad helps me uncover what motivates the kids, and the glimpses I get into his heart and mind help me understand the hearts and minds of his children.

When I emailed the kids’ dad to explain my request and reasoning behind it, I decided not to ask him for a full cow suit adventure, but rather if he would simply pose for a picture in a bull hat next to me in my cow suit. He responded within minutes that he was fully on board and asked where should we meet. With that swift and enthusiastic response, perhaps I should have asked for a full cow suit adventure. Next time.

Our family has plenty of the normal complications and conflicts that families do. The adults don’t always stand around merrily in heifer get-ups smiling for the camera, but we will do something just like that if it’s in the spirit of benefiting the kids.

On this Father’s Day, I salute the dad who didn’t hesitate to wear the bull hat, and I’m so grateful for how he shares himself and his kids with me. I’m grateful for how much lets me love them. 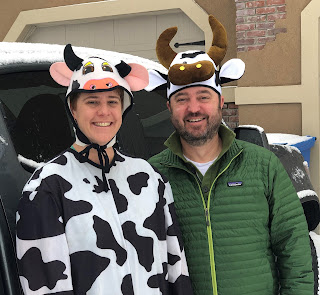 Posted by Billie Johnson at 8:19 AM