This is a second installment as an assignment for my Topics in Professional Writing class at Idaho State University. We read three comics (Boxers & Saints, Asterios Polyp and Logicomix) and are to discuss them in a blog.

I loved the Sunday comics. This is not about comics like that. Another term for the medium is "graphic novel."  I've confessed before that I’m not a much of a reader and this assignment has let me know that even when encased in comics, I still don’t love to read. Of the three comics we read, I found the experience of reading two of them to be pleasant. The third just stressed me out.
Boxers & Saints by Geen Luen Yang

The first graphic novel I read is Boxers/Saints. I went into this prepared to hate it. I didn't. Win! From the Amazon description, Boxers & Saints are two companion graphic novel volumes set during China's Boxer Rebellion.

The exercise in reading these two books was fun for a few reasons:

(1) It was quick. I often feel the stillness involved in reading is wasteful and maddening, but because these went quickly, reading didn't lead to any bouts of mad cow. The panels were succinct and laid out orderly to facilitate quick consumption. My kind of comic.

(2) The content was interesting.  The characters were surprisingly and quickly well-developed in the graphics and I was engaged in the story line immediately.

(3) It was thought -provoking. I began with Boxers so I found myself much more sympathetic to their side in the Chinese rebellion rather than the side of the Christians or the "white devils" portrayed in Saints, but realizing my shifting or questioning attitudes as I progressed through the second book was great fodder for the mind.

(4) I experienced something new and therefore learned a few new things about myself. On the rare occasion that I do read, I find myself thinking about characters and story lines. I did that here too, but I realized that my mind's images traversed between the comic characters and more lifelike inventions in my mind.

Something still unresolved for me, however, is that there is considerably more color in Boxers than there is in Saints.  I brought this up in class and we wondered if this was the authors way of painting the Chinese in a more positive light than the Christians, but in researching him, he identifies as a Catholic so that wouldn't really make sense.

I spent a fair amount of time googling these books to see if I could find a reference to the colors and palate, but I haven't turned up anything yet.  I did learn, however, that the amount of information available on the internet relating to this series or anything else I may be assigned to read is astounding.

The media with which we are creating and producing assignments has changed since I was last a student as has the setting for research. It would be easy to borrow or flat out steal content for these assignments, but I luckily, in addition to being a staunch rule-follower, I view that as self-defeating and classless.  And this cow's got class, darn it. (As the previous blog explained.)

I liked this book more as it went on, but it took a bit. It was busy and hard to follow until my eyes and mind were used to digesting the material. 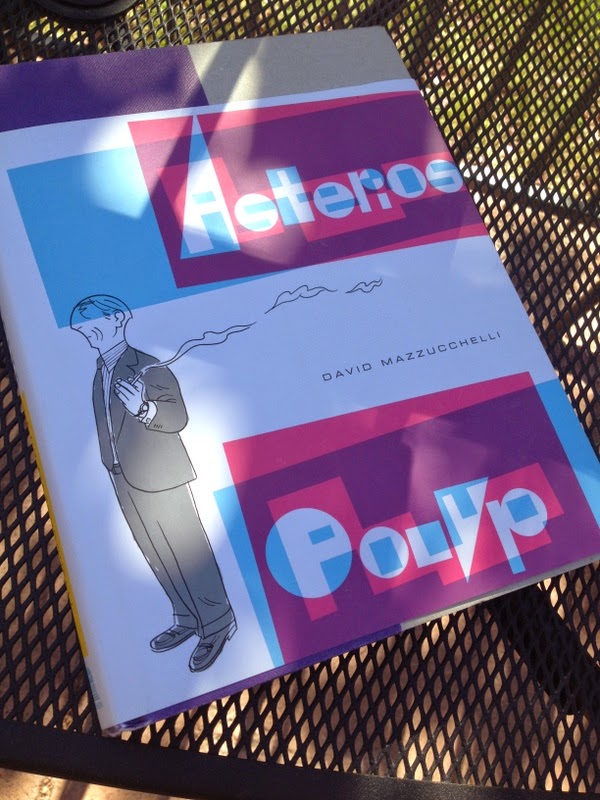 Asterios Polyp is narrated by the main character's (Asterios') still born twin brother.  Yeah. That right there lets readers know they are in for a ride.

As the class embarked upon a discussion of this book, we flitted from talking about themes, plots, foreshadowing, character breakdowns and allusions to Greek mythology to the media itself. The graphics in a graphic novel add an entirely new dimension to analyze and dissect. I found myself grateful that this genre wasn't prolific during my youth because this extra dimension of analysis in any high school essay would have seriously encroached upon my social life.

[I'm torn and a little confused here with the directive "Discuss the readings." As this is a class on various media used to create professional writing, should I be focused more on the content here or the media? Oy.]

The story begins with a storm and lightening bolt graphic and then Asterios' disheveled apartment catching on fire. He flees and then the story features present day and flashbacks illustrating the rise and fall of his architecture teaching career and his marriage with brief commentary from his bitter, never-born twin, Ignazio. Ignazio loves Asterios and is rooting for him, but he does wonder why he had to be the one to die and Asterios lived. Asterios wonders the same thing.

Asterios Polyp is not delivered in neat, organized panels, but rather the comics are all over the place. Some pictures have a border, some don't. A rhythm in the design and delivery might appear for a few pages and then BAM! There'd be a highly detailed and scattered graphic that demanded I divert my focus from words and dialogue of the story and focus on the artistic content. I realize that this is part of the overall experience of this genre, but the stop and start reminiscent of a lurching amusement park ride did not amuse me.

Asterios is an arrogant jerk with whom I sympathized throughout the novel. That's likely due to his being drawn in vitro with that same baby-esque head that he maintained throughout the work. Children evoke empathy. Although, his round, baby head was contrasted with a stiff suit and collar and a cigarette, he is clearly just a kid trying to get by in spite of his own folly. (Aren't we all?)

I was initially distracted by the number of fonts until I realized that each different font represented a different character. It seemed to add to the chaos of the material, but once I realized that differentiation, my mind could parse and accept it better.

I could write about the symbolism in the text and graphics of this book until the cows come home. Really. This book alone could be the topic of a single class with weeks on end.

We could take a week for color and color pairings. Font styles and character matching. he flowers on the inside cover. The content in and out of panels and frames. The angles and curves. The cat. The fat guy. (Cats and fat guys ALWAYS mean something.) The knick-knacks. The airplane that shows up in the clouds throughout the book. The allusion to numerous Greek classics. Asterios' watch, lighter and pocket knife that he saves in the fire. The lack of page numbers. (Who does that!?)  This would be a class I may or may not sign up for.

Fortunately this is supposed to be a blog and blogs are supposed to be short (ish), so until that class...thanks Asterios, Ignazio and David Mazzucchelli. It's been real.

I had such high hopes for this read.  I began it on the recumbent bike at the ISU gym—but not in a cow suit. After ten minutes on the bike, my overwhelming thought was,  "Holy cow! I'm out of shape because this book is heavy and my elbow creases are too sweaty to keep reading."  The book hardly snagged my focus as I was more focused on my physical  ineptitudes. I tried reading it at the gym, a coffee shop, in a hammock, during breakfast, in my lazy boy, and before bed. None of these places made this more readable for me. 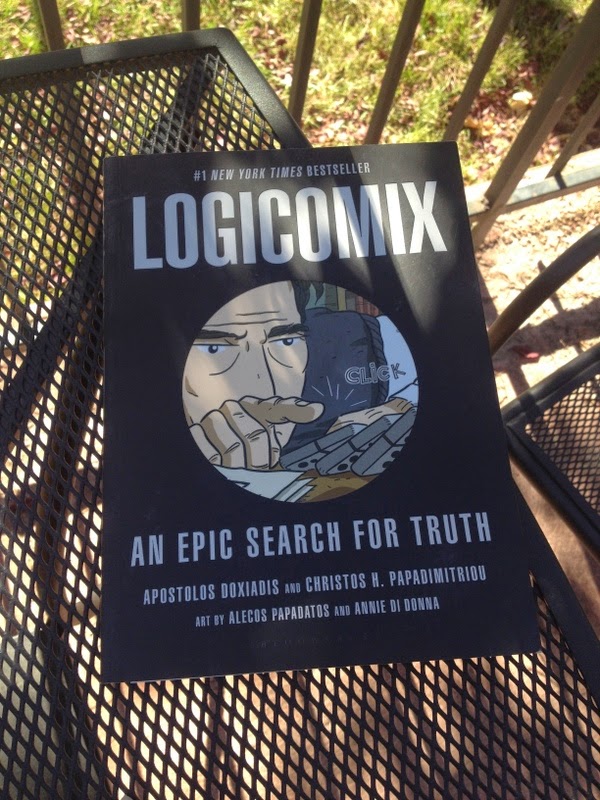 Logicomix is a non-fiction graphic novel which details the life of Bertrand Russell, a British philosopher, mathematician and logician. The present day authors show up every now and then--in comic form--to discuss their endeavor of writing a comic about ole Bertie.  In present day, "Bertie" would either be dirt poor and considered eccentric or teaching. Oh. Wait.

The book discusses the madness that many a philosopher and logician of the time was thought to suffer. Stories and accounts like this have me waffling between wishing for that same zest for knowledge encroaching madness and living the life of simpleton Forrest Gump. I'll settle somewhere in the middle as an engineer in a cow suit, thank you.

The present day authors' intrusion upon the story was exactly that. A distracting intrusion. I realized that I find present day philosophers and logicians pompus and irritating while there's much more romanticism surrounding those of old. Bertrand was likely just as much of a self-unaware jerk but he's got history to help soften the lens through which I see him. Enjoyed the old guys; resented the new ones.

Someone in our class discussion characterized the book as "dense." That really is the perfect word. The topic itself is dense and dizzying and the cartoons and dialogue telling the story were as well. Many of the page's panels broke the rule of of 20-25 words to a speech balloon and 30-25 words per panel. Dense is great for fudge; not for a graphic novel. (For me.)

I appreciated the color and the actual artwork and the page numbers of this work, but I honestly couldn't quite finish it. It spark barely enough interest in Betrand Russell for me to look him up on wikipedia and to wonder how I might respond to other works about his life and accomplishments, but that's about it. I only wondered.

One of my lil calf buddies had his first gymnastics practice this week. He did great for the first 10 minutes during the jumping, tumbling and headstands, but when the coach corrected his form on a handstand, he cried and quit. He said it was too "hard."

This kid never sits still. He does headstands ANYWHERE and can boost himself into a pike position and hold it for over 20 seconds. He just fears the new and uncomfortable and it takes a few experiences before he realizes, "Hey. I like this."

That could be me and the comic genre. Could be.  I like to moooove almost as much as this kid though, so I probably won't be spending much spare time seeking out the latest and greatest graphic novel let alone talking about them. I'm intrigued at the possibility of incorporating a comic or two into some of my professional blogs, however. This cow might want to talk about those comics.

Posted by Billie Johnson at 1:28 PM