I had a beer in the Cheers bar in Boston today. In a cow suit.


It all started with cupcakes in Idaho a week and half ago. Pocatello cake artist Paula Ames does this “Tasty Tuesday” thing. She asks her Facebook fans for nominations of “good in our community.” Then she shows up on a Tuesday morning with some of the best darn cupcakes you can imagine. As she presents her goods to the weekly winner(s), she tells them that someone in their midst thinks they are wonderful.
Paula appeared at my office last week after my longtime high school classmate and friend, Tiffany, nominated me.  Smiles all around as I raised a coconut lime cupcake.
Cheers!

I texted Paula after she left to thank her and ask if I could join her on a Tasty Tuesday delivery sometime. In a cow suit. And if she’d wear one too.  I thought with our mutual aquaintance in Tiffany that Paula knew about my blog and cowing. She didn't. Awkwaaaaard. We began a daylong text exchange about “What is cowing?”


She discussed fears and insecurities. She said it might bring up bad childhood memories.  I tried to play back my two minute meeting of Paula. I’ve become so comfortable in my suit in my small Idaho city, it didn’t dawn on me that one might not fit her.  I strained to remember her physical appearance in detail, but our meeting was so quick, and honestly…as soon as I saw the frosting, nothing else was in focus.
Am I a jackass or an angel for not considering her figure when I threw out my cowing invite? I've been pondering.


As I sensed she was warming to cowing, I told her that my schedule would be tricky because I've been working in the Boston area. I gave Paula too much information. The invite dialogue ended with her telling me that she would only cow with me IF I did the following:
1)      Wore my suit to the Cheers bar in Boston AND
2)      bought her a t-shirt AND
3)      sang the TV show theme song AND
4)      showed her video of it.


Whaaaaaa?   Cheers?  Fine.  A t-shirt? Sure. Sing? Uhhh….
Video?  No. Freakin’. Way.
I’m not a singer. My musical prowess extends to playing the trombone loudly and badly in high school.  Paula smugly reminded me that cowing is about stretching boundaries. Fine. This was via text, but I heard her smug.


She was right. If I had the kind audacity to invite her to do something so wonderfully uncomfortable, I should be able to stretch my own cow suit cozy zone.
I had to udder-up.


I stayed at my hotel until the last possible minute this morning. Bostonians and tourists smiled, pointed and mooed at me on the subway. They stopped to take pictures of me and with me as I walked the few blocks from the train station to Cheers.  When I got to Cheers, a mother of two older teenage kids snapped this photo. Her son stepped slightly behind her as she took focus. He smiled but was skeptical.
I paused in the stairwell and took a breath before walking in. 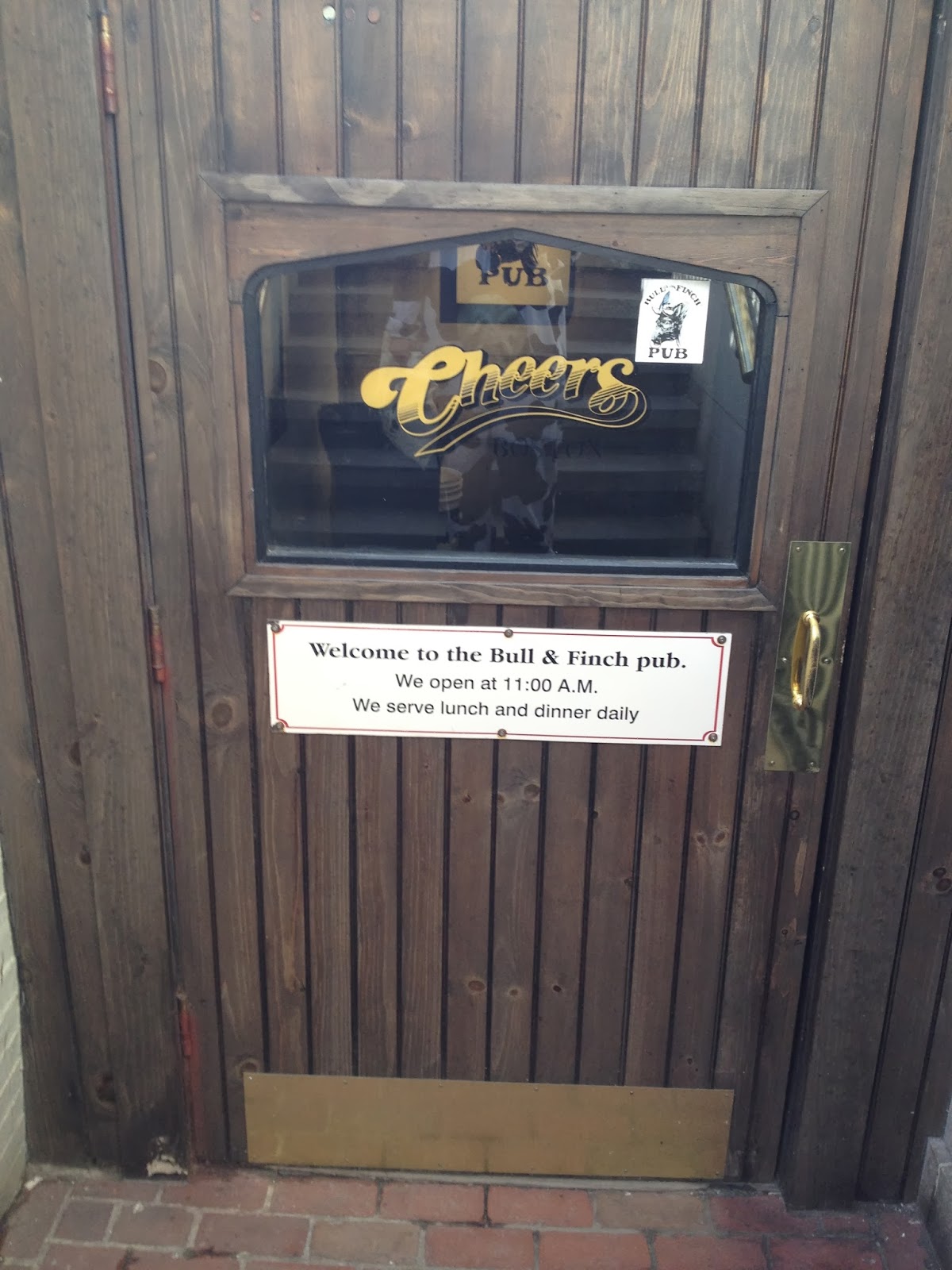 Funny. The real name of the pub is The Bull and Finch Bar. Hellloooo, Brother Bull.  Looks like I’ll be just fine here. 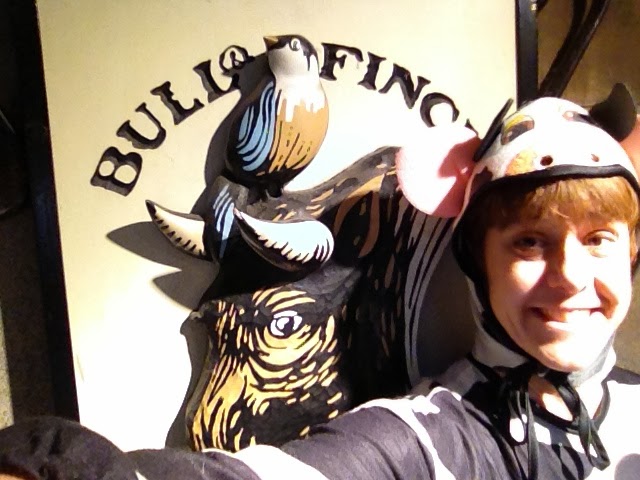 When I walked in, Marcus and Jaynie greeted me with instant smiles and a chuckle-laced, “Welcome to Cheers!”  I took it all in. My senses are so heightened in the suit. I force my eyes to tell my brain everything I see, so I don’t have the neural energy to recognize the discomfort. I realized this defense mechanism today.
Pictures of Sam, Norm, Cliff and Carla. The bar, the railing, the stained glass, the wooden Indian statue, smiling people and beer!


I started to explain Cow Suit Saturday to Marcus and Jaynie when two men from Spain wanted my picture. They were so cheerful. This guy told me in a rich Spanish accent how much his wife would laugh and like to see this “American Cow”.

﻿
﻿
I showed my hosts my cow suit bag and let them know I had an extra one and would love for one of them to wear it and sing with me. I knew that need to ruminate in their young minds for a bit.

﻿
﻿I chose a seat at the bar in the corner where I could watch everything. I seriously contemplated whether or not to have a beer.

﻿
﻿Argument For A Beer: My visualization of me singing was going to be solo and quietly into my iPhone. I even wore eye makeup today because my practice runs earlier showed buggy eyes. (yes--I videoed solo practice runs to make me feel better. They did NOT make me feel better.)  I have a horrible voice and an ice cold beer would undoubtedly settle my nerves and make it easier.

Argument Against Beer: Today was about courage and doing something uncomfortable, feeling every lick of it and forging on.


Argument For Beer: I was in the Cheers Bar, for crying out loud. What would Norm do?
﻿
﻿I ordered a Harpoon IPA and a non-alcoholic Kalber.

﻿
﻿Sipping the beers and looking around the place was surreal. I had been bummed to go alone, but if someone had gone with me, I wouldn’t have been able to take it all in. My solitude let me overhear the hosts discussing who would sing with me. Yessss!!!!


﻿
﻿Marcus gets the Courageous Cow of the Day award. As I looked at hundreds of eyes today, I wondered which ones would see the world through a cow suit with me. Surely, someone would. And Marcus did.
Mike, the manager, cued up the original song on his iPhone and played it over the speakers while the three of us tried to sing behind the bar. *Tried.*


We had hand-written lyrics. We were smiling. We were nervous. We were in it together! And we were bad. So bad.  It was the bad that made today sooo good. (I’m not posting the video here, but I’ll be showing  the proof to Paula.) Note our posture and expressions as the song went on. Jaynie looks terrified. Marcus, I think, just kept his eyes closed the whole time thinking, "If I can't see you, you can't see me." 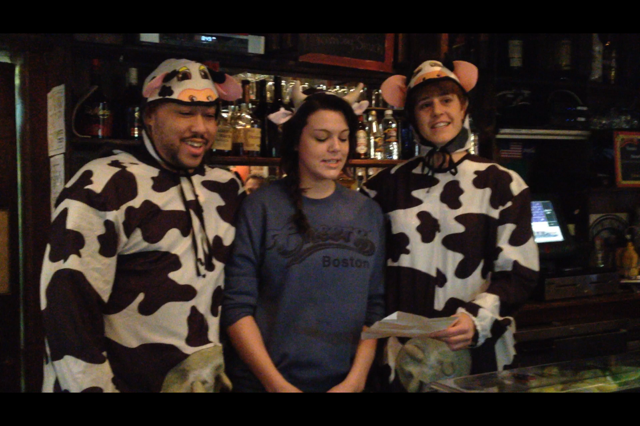 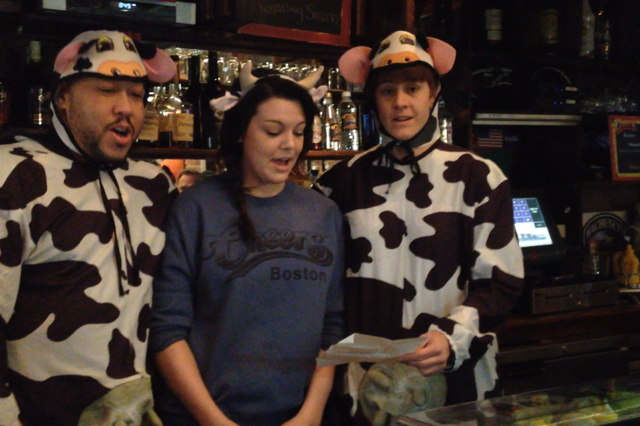 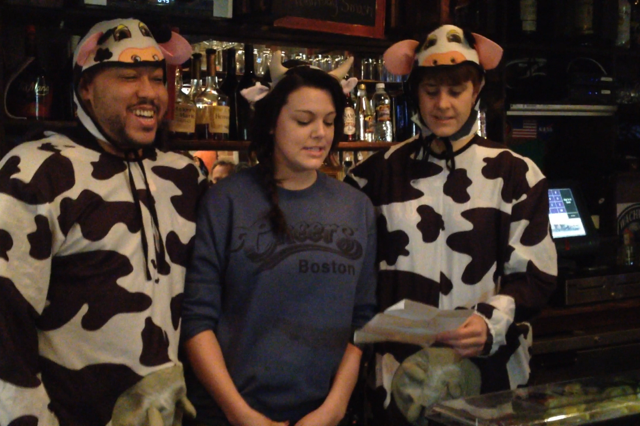 It’s interesting to think about how our actions serve as cattle-ists and exactly what we do for or because of other people. Tiffany’s casual nomination on Paula’s Facebook page in Pocatello Idaho led to my cheerful time in the Cheers Bar in Boston today.   The ripples are too many to list here.
I have been working in New England A LOT over the last few months. My days are long and the nights are lonely. (Is that a song? It should be if it isn’t.) I have never spent this much time in a place where no one knows my name.  Today was starkly different within moments of entering Cheers.

Mike, Jaynie and Marcus made my experience exactly what the TV show portrayed and exactly what the famed lyrics portray. I may not remember their names as time passes, but I'll certainly remember our cow suit cheer at Cheers today. And Paula…I bet when she’s cowing with me, SHE will remember your names—and send you a mixture of across-the-country curses and cheers.

Making your way in the world today takes everything you've got.
Taking a break from all your worries, sure would help a lot.
Wouldn't you like to get away?

Sometimes you want to go
Where everybody knows your name, and they're always glad you came.

You wanna be where you can see, our troubles are all the same

You wanna be where everybody knows  Your name.

You wanna go where people know, people are all the same,

You wanna go where everybody knows your name.

Posted by Billie Johnson at 7:19 PM