Courage in a Cow Suit

I couragously cowed in Boston. My few solo hours held subway rides, photos with American tourists, photos with foreign tourists, moos, giggles, deep breaths, sighs, a marching band, a march from the Capitol, singing, beer-drinking, almost-dancing and almost-ice skating. It was a good day and when it was over,  I cried. It was a cow suit sucker punch like I've never had, but it was good.
The Challenge
My challenge for the day was to go to the Cheers Bar in Boston and video myself singing the TV show's theme song in my cow suit. The "prize" was that a friend back home in Idaho would suit up with me and cow some time. Singing in public terrifies me. I karaoked in college on a bet. It was Bette Midler's "The Rose."  The audience howled. Not like laughing--like wounded dogs crying to the moon. All I could think was how the lingering notes of the Cheers song were going to be like that.
Gulp.
I needed to muster all the courage I could for this.
The Prep
I had a healthy breakfast and a killer workout. My treadmill playlist included anthems from Kelly Clarkston and Katy Perry. There was a little Erasure and the Glee version of Don't Stop Bull-evin'. That's how I spell it now.  I also have Blessed Be Your Name on my favorite running list. It's a contemporary Christian song that (1) I just like and (2) was played at my 15 year old friend Ryleigh's funeral.  (I've mentioned Ryleigh before in here. Our Cows for a Cure Relay for Life Team became Ryleigh's herd after she died of leukemia in 2009. Ryleigh cows with me EVERY time I venture out.)
The lyrics and treadmill meditations did wonders in my mind to build courage. Each song reminded me of people in my life who've possessed great courage--some of it I've seen, but most of it I've only deduced because I simply know we all have our demons to battle. Ryleigh was courageous.
I'd been to the front desk at the hotel that morning for a razor because I forget how short the cow suit is. I wanted to maximize my appearance for maximum confidence that morning. I don't know why I weighed myself at the gym. Dumb. And while I'm all into being bold & courageous, I weighed 185lbs--five pounds off of the most I've ever weighed. I was maximized, alright.
I boarded the hotel shuttle for the train with a pocket full of gum, a fully charged camera phone, my hand-written Cheer's lyrics, and my Cow Suit Saturday bag with an extra cow suit in case I found someone who wanted to cow with me.  I had on eye liner, foundation, and mooscara. Ready to Cow!!
Bovine Loose in Boston
On the shuttle, there were a Hispanic husband, wife, kids and mother-in-law. The driver was Hispanic. There was a middle eastern man in front of me and a black man next to him. One of them had on a delicious cologne. A 20-something white kid sat straight up across the aisle from me. I'm almost certain he was high-functioning autistic by his posture and nail biting rhythms. He'd been at the hotel desk before me and was very polite. He was the only one of the other groups to thank the driver and wish him a nice day right on cue. I made sure I did, too. And I tipped him. I ALWAYS tip regardless, but am extra certain when cowing. That's right...a tipping cow.  I am cordial in a cow suit because that's how I want to be remembered.


Instead of focusing on stares or looking down, I held my head high and took in everything around me. I realized on this venture that if I fill my senses and process as many sights and sounds and look for the joy and wonder around me, I load my brain so it can't even process my nerves.I know that signs of courage and encouragement will speak to me as the day unfolds.  And lookie here...


My biggest disappointment of the day was that I forgot to pack my Converse sneakers. A new Converse headquaters is being built in Boston. I'll have to go back. I don't need a reason, but reasons help.
I walked along the Freedom Trail en route to the Cheers bar. This was about my fourth time traversing these sidewalks. How many times can I say, "everything changes in a cow suit?" It's like when you get glasses and realize that trees are actually individual leaves rather than a clump of green. I see and hear individual pieces of the day rather than the whole.

As I crested Beacon Hill, I could hear a marching band. Trombones. There was my musical boost for courage. I loved playing the trombone solo in pep band. I let that memory take up some space in my head for a second while I caught myself marching to the beat of the drums as I walked toward them.  There was a march on the Capitol. I slowed down a bit to take stock of the marchers, to make sure I didn't stumble into something I'm moorally opposed to. They didn't have big signs but a lot of the participants looked like me sans a cow suit.

One of the ladies was from Minnesota and started talking me up and explaining their genesis and focus. She talked of renewable energy and electric cars and then said, "And you're part of the problem, too, ya know? Cows. You.  A problem."  I'm pretty sure she was kidding, but she didn't follow that up with as much socially-appropriate laughter as she should have. I kept mooooving.

Gaulav and his friend were the first to ask me to take my picture. They were so friendly. I should have asked where they were from. I can't imagine being in a foregin country surrounded by people speaking a different language.
The marchers followed the band to gather in the Boston Commons Park for a rally. The music was peppy and grand! 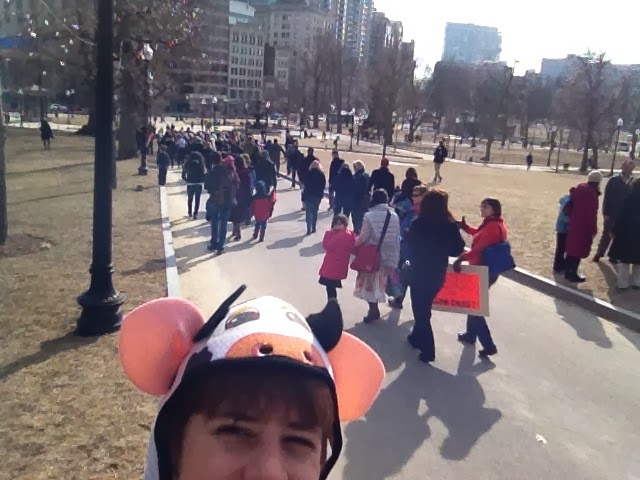 I wanted to dance. I like to dance, but it's a toss-up if I'm a worse dancer or singer and since the latter was already on the day's docket, I hung back and tapped my foot.
I made it to the Cheers Bar!!  (See my earlier post for the full Cheers breakdown.)
While the employees are getting ready to sing with me, I got to pose behind the Cheers Bar. It never would have happened if not in a cow suit. I wouldn't have asked. I wouldn't have chatted up the staff. The sweet folks from New Jersey wouldn't have noticed the ordinary redhead from Idaho in jeans and and fleece. At this moment, I realized I didn't need courage for the cow suit, but it had given me courage.
I left the bar to walk through the park some more. I like this park. Scenes like this are nestled in my head from artwork in my childhood. American folk artists like Jane Wooster Scoot and Charles Wysocki captured my imagination of Americana and picture-perfect paintings. I would lose myself in them.

I had a happy childhood. When I run into old friends of my mom who reminisce and talk about it, they tell me that I was the most wanted child they ever met and she only wanted one. As an only child, I would spend hours playing board games, house (I'd have my stuffed animals play different parts) and setting up things to emulate "perfect" life scenarios much like the picture below.  I have American Folk Art all over my house today.

A chill started to sweep in. I wanted to wander the park and let it sustain the cow suit smile a little longer. I wanted to ice skate. Really--a cow on ice!?! I skipped it and added it to a mental cow suit bucket list because I wanted this scene to stay just like it is. It's perfect
Cow Suit Sucker Punch
The train ride back to the hotel was uneventful. Well...compared to the rest of the day. I'm sure there were stares and smiles I missed, but my brain was tired. My senses had worked hard.  There were two older handsome pilots on the shuttle from the train to the hotel. When we walked past the valet stand, I dropped my rental car ticket and one of them alerted me, "You dropped something. Yikes! That's not something I want to say to a cow. Yuck!"  Ha!  He had an arrogant air about him, but that was completely casual and endeering.
The valet took my card and I changed out of my suit while he got my rental car. As I approached him for the keys, he pulled them to his chest and said, "I'm sorry. This isn't yours. I believe a cow gave me the ticket." Yes! Well played, Mr. Valet.
I got in the car grinning non-floppy ear-to-non-floppy ear and started to process it all as I drove out of town. Like everything awesome, much fun lies in remembering. As I was getting ready to call people to tell them about my day, I was sucker punched.
It's been almost two years since our relationship ended, but I still think to call her with my excitement. Not immediately, but she's high on the list, and that's just not how it is now. Boom. Tears instantly. My happy reflections were elbowed right out of the way by this grief that insisted on my attention. I was stuck in the car in normal clothes and unable to focus on anything but the traffic and the raw sense of loss. The was no cow suit diversion now. I was stuck suitless and sad.
I caught myself holding my breath. Traffic was thick but not ultra heavy. Cars and people were near me but traveling fast. I realized I was stifling my sorrow because I didn’t want anyone to see me crying in the car. I’ll wear a cow suit all over Boston, but I’ll be damned if strangers in traffic see a tear.  Cow-ard.
We had a life as perfect as American Folk Art but it fell apart. I am overall happy today--in and out of the cow suit--and things are exactly as they should be, but I'll always be sad it went the way it did. I’m working on another painting now and Boston is a beautiful base for this cow’s new canvas.

Posted by Billie Johnson at 9:04 PM